Containing the COVID-19 epidemic has topped the agenda of the international community as the virus has developed into a global pandemic where no-one is immune. Facing this common challenge, therefore, countries should deal with it through joint efforts. 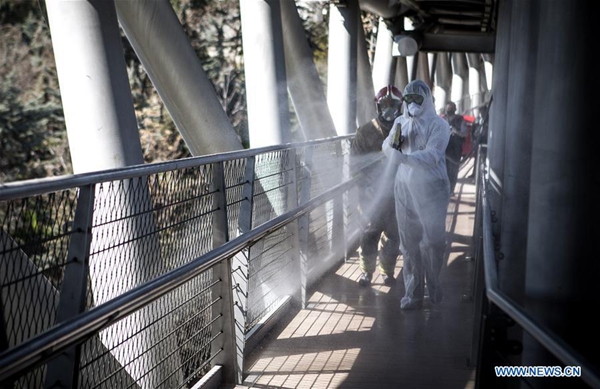 Iranian firefighters disinfect "Tabiat Bridge" in Tehran, Iran, on March 9, 2020. Iran's Ministry of Health and Medical Education on Monday announced that the outbreak of novel coronavirus in Iran has affected 7,161 people, out of whom 237 have died. [Photo: Xinhua]

As the one claiming global leadership, the United States is expected to put aside its disputes with countries like Iran. Unfortunately, the Trump administration is doing the opposite, which will hurt Iran's efforts in controlling the disease, and will undermine U.S. international image as well.

Iran has witnessed the massive transmission of the virus in the last weeks. The number of the confirmed cases had increased to more than 11,000 on March 13, since reporting the first case less than a month earlier.

As a nation seriously hampered by economic sanctions, Iran was in dire need of medical materials and facilities. Fortunately, countries like China immediately offered help.

It was surely to be expected that the United States, as a nation with the richest medical resources and talking most often about humanitarianism, would also lend a hand while laying aside previous political disputes.

It is true the U.S. did make some encouraging noises, with President Trump saying on February 29: "If we can help the Iranians with this problem, we are certainly willing to do so."

Secretary of State Mike Pompeo also made a similar statement about helping Iran in the battle against the infectious disease, while the Treasury Department said that the Swiss Humanitarian Trade Arrangement (SHTA) was fully operational for humanitarian aid to Iran. All these statements were hugely publicized in the media.

Unfortunately, these promises have not been seriously met. Iran's Deputy Health Minister Karim Hemmati confirmed in early March that the SHTA would not remove U.S. sanctions on the import of medicine by Iran, as it was not capable of handling money on large scale.

As an indication of Iranian disappointment, Abbas Mousavi, spokesman of the Ministry of Foreign Affairs, dismissed Pompeo's claim as a propagandistic and hypocritical move made for political purposes to deceive world public opinion.

It is not the full story. According to Intercept's report released on March 6, an anti-Iran pressure group with close ties to the Trump administration was urging major pharmaceutical companies possessing special licenses for "humanitarian exemption" to conduct trade with Iran not to do so.

He also created a new word "medical terrorism" to describe Trump's policy, saying, "The world can no longer be silent as U.S. Economic Terrorism is supplanted by Medical Terrorism."

It is very clear that the U.S. not only didn't provide any assistance but also maintained sanctions on Iran even in humanitarian sectors. Iranians should have no reasons to express anger if they really get the exemption. The U.S. always likes to hold high the banner of humanitarianism in the international arena, but its conduct in the global COVID-19 fight, has fully exposed its hypocrisy.

The U.S. openly expresses its support for Iran on the virus issue not wanting to be a target of global moral blame. Yet it clings to its intent to topple Iran's Islamic government, and perhaps even regards the epidemic as an opportunity to do so.

Countries have every reason to cooperate and help each other in the fight against natural disasters particularly in the face of a rapidly spreading epidemic. We are human beings, and we share the same empathy of our kind, summed up in the word humanitarianism describes.

Secondly, we have shared future and face the same kind of threat from an epidemic like COVID-19. Within the context of globalization, countries are interconnected in so many ways. An epidemic in Iran might not directly spread to the U.S., but can do so indirectly. A seemingly distant epidemic can reach anyone if not controlled.

Iran is in urgent need of medicines and facilities, and its shortage in this regard is a result of U.S. sanctions that could prolong its own endeavors and also add to the difficulty of global efforts in this regard.

It is time for the U.S. to remove its sanctions on Iran.